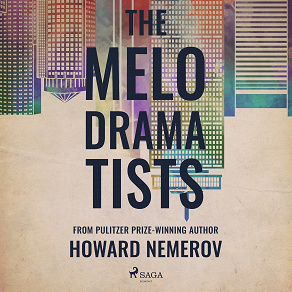 by Howard Nemerov
Nemerov’s first novel, ‘The Melodramatists’ is a parody of life in 20th Century America. When wealthy Nicholas Boyne is committed to a mental health facility, his two daughters, Claire and Susan, are left to their own devices. Susan embarks on an ill-fated affair with her psychiatrist, while Claire undergoes a spiritual awakening and sets about a plan to convert the family home into a retreat for the rehabilitation of prostitutes. Brutally funny and packed with wry observations, this is an ideal read for anyone curious about the works of this celebrated writer.

Howard Nemerov (1920 – 1991) was an American novelist and poet, who won the Pulitzer Prize in 1978. His novels are characterised by the use of self-deprecating wit and an ongoing sense of irony. While his books tended to satirise 20th Century American life, his poems often focussed on the beauty and innocence of nature. In addition, Nemerov also worked as a scriptwriter, most notably on the film, ‘Tall Story,’ starring Anthony Perkins and Jane Fonda.
Listen to sample
Log in to borrow