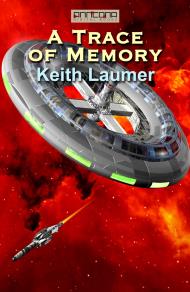 A Trace of Memory

A Trace of Memory is a science fiction novel by American author Keith Laumer.

Legion was desperate—but not that desperate. Even petty larceny seemed preferable to that kind of proposal. But fate stepped in, and now he is on the run, pursued by cops, the CIA and a few not-so-friendly acquaintances of Foster. And Foster has lost his memory—not to mention about thirty years of his age!

The key to Legion's dilemma, and to Foster's forgotten past, is in a row of metal cylinders aboard a spaceship that has been orbiting Earth for thousands of years. And Legion's troubles have really only begun....

Legion was homeless and hungry and looking for a way to get to Miami when he crossed paths with Foster. Foster enlists Legion's aid in dealing with the mysterious light-beings called Hunters who he says have been chasing him, and also in recovering hos lost memories.

He possesses a journal with entries dating back centuries which contain the only clues to his identity. Their quest involves Stonehenge, alien space ships, far away planets and unique ways of dealing with age and life's memories.

"Let's get out of here fast," I said. "We've probably set off an alarm already."

As if in answer, a low chime cut across our talk. Pearly light sprang up on a square panel. Foster and I stared at it.

I sat down in the single chair before the dusty control console, and watched a red blip creep across the screen.

"That blip is either a mighty slow airplane—or it's at one hell of an altitude." I sat upright, eyes on the screen. "Look at this, Foster," I snapped. A pattern of dots flashed across the screen, faded, flashed again....

"I don't like that thing blinking at us," I said. "It makes me feel conspicuous." I looked at the big red button beside the screen. "Maybe if I pushed that...." Without waiting to think it over, I jabbed at it.

"I'm not sure you should have done that," Foster said.

"There is room for doubt," I said in a strained voice. "It looks like I've launched a bomb from the ship overhead."

A short version of A Trace of Memory appeared serially in Amazing, July-August-September, 1962. This version was first published in 1963.

Keith Laumer is known for the Bolo and Retief stories. The Bolo stories chronicle the evolution of super tanks that eventually become self-aware through the constant improvement resulting from centuries of intermittent warfare against various alien races. The Retief stories deals with the adventures of a cynical spacefaring diplomat who constantly has to overcome the red-tape-infused failures of people with names like Ambassador Grossblunder. The Retief stories were greatly influenced by Laumer's earlier career in the US Foreign Service.