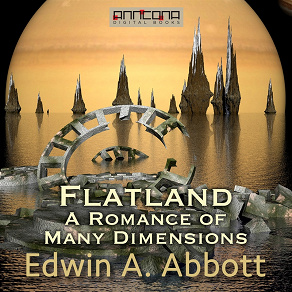 Flatland: A Romance of Many Dimensions

by Edwin A. Abbott

Flatland: A Romance of Many Dimensions is an 1884 science fiction novella by the English schoolmaster Edwin A. Abbott. As a satire, Flatland offered pointed observations on the social hierarchy of Victorian culture, but the novella's more enduring contribution is its examination of dimensions.

Flatland: A Romance of Many Dimensions describes a two-dimensional world and explores the nature of dimensions. It has often been categorized asscience fiction although it could more precisely be called "mathematical fiction".

In a foreword to one of the many publications of the novella, noted science writer Isaac Asimov described Flatland as "The best introduction one can find into the manner of perceiving dimensions." As such, the novella is still popular amongst mathematics, physics and computer science students.

With the advent of modern science fiction from the 1950s to the present day, Flatland has seen a revival in popularity, especially among science fiction and cyberpunk fans. Several films have been made from the story, including the feature film Flatland (2007). Other efforts have been short or experimental films, including one narrated by Dudley Moore and the short films Flatland: The Movie (2007) and Flatland 2: Sphereland (2012).

Edwin Abbott Abbott (1838-1926) was an English schoolmaster and theologian, best known as the author of the novella Flatland (1884).